I first got into Warhammer 40k back in like 2005/2006 or whenever it is that Assault on Blackreach came out. At the time I really did not know much about the lore, I just knew that the figures looked fucking awesome, and so I wanted in on this hobby. It was that Christmas that father then got me a starter paint kid, Assault on Black Reach, and the Space Marine codex (5th edition I believe). At the time I just took great pleasure in painting my figure and didn't really pay much attention to the game aspect of the hobby. As far as I was concerned, painting the figures was fun, and it was a great stress reliever. 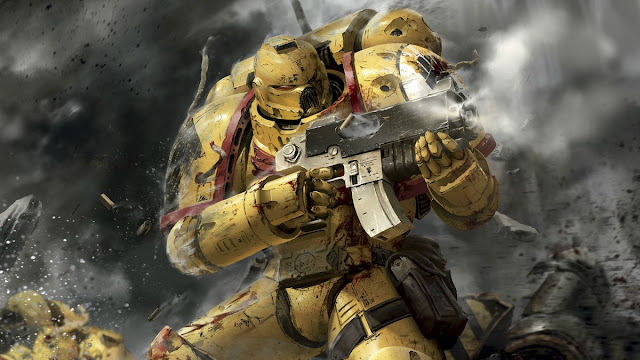 Recently I got back into the hobby when one of my supervisors made a comment that he wanted to get into Dungeons and Dragons or a similar hobby. I suggested he look into Warhammer 40k which he did, and immediately dismissed as it was too expensive. It was not long before he began to browse the Games Workshop website though, soon settling on the heretical World Eaters as his army of choice. Naturally I was disappointed in his decision to choose a traitor legion, but said fuck it, at least I would have someone to learn the game with me, and to talk about painting with. Next thing you know, we have two other people at work looking into the game. One of the men was a friend of ours named Ben. Ben decided his best option was to go as the Imperial Guard, although they are no Adeptus Astartes, I told him it as an acceptable choice to fight for the Imperium of Man. The second man, he was one of my subordinates who was surprised to find that I was into Warhammer 40k, but soon started looking into buying a Tau Army, good for me as far as I was concerned, their squishy bodies were of no threat to me.

Once I ordered a few marines I decided I was going to go Ultra Marines, my assault on black reach tactical squad and Dreadnought were already in Ultramarine Blue. (see below)
As you can see, I never got around to painting my terminators. Hell I never even finished the commander or sergeant that came with the unit. Since I still had a few unpainted units, I decided that I would take my brand new units, and take the unpainted units from the 5th edition set and simply create my own custom chapter and color scheme.Since I am a big fan of the Mass Effect series I decided that my best option was to start a chapter based on Mass Effect. This Chapter soon became my N7s

The truth is that the N7s didn't start off as the N7 marines, I actually played around with a few ideas. First I thought I would paint the marines on a "type of squad" basis. Tactical Marines would be painted in Blue Suns, Devastators in Blood Pack, and Scouts in Eclipse. Veterans would all have N7 armor, and Dreadnoughts would come in Normandy's colors. Then I decided all my Marines would be Cerberus, then eventually I just went for N7.

Now, I know what some of you are going to say "But N7 armor is black and red" and to that I have a response. N7 armor is whatever goddam color you want it to be when you go into the armor's appearance settings, so there you go. In my case I went with "Dark Reaper" as the main color on my Marines. Each Marine, Dreadnought, and Scout which is to be painted in the N7 colors will also have an "N7" on a shoulder-pad, or anywhere on their armor or equipment. Since I decided that this is an Ultra Marines successor chapter, every now and then an Ultra Marine emblem can be seen on some of the units.

The thing is I do not want to stick to creating straight out of the box Space Marines, I want some sense of individuality in my builds. So after I heard that third parties sell their own upgrades (at varying levels of quality) I decided that I should also give it a try. 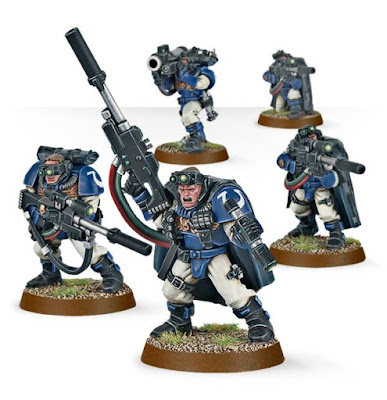 Notice their heads, with the night vision gear, and all that jazz. So Nifty and tactical, but I though, man there has to be something better. After looking online I found several products I felt would better fit these masters of stealth. The following products are from Anvil Industry, these are just some of the products from them that caught my attention and will tested to see if they go on my final product. 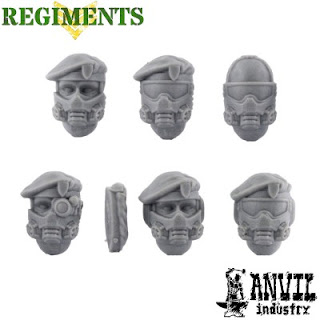 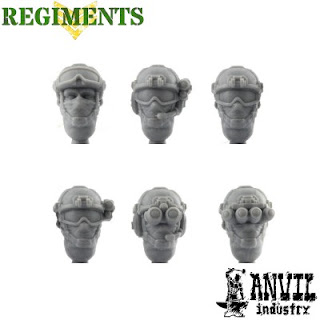 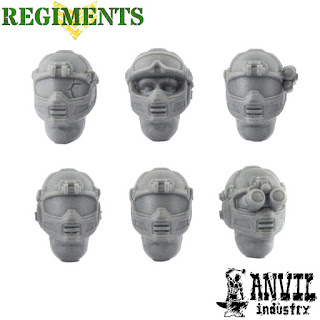 I purchased some items from bits of war, But these were mostly for the land raider weapons.
Here is one of the products 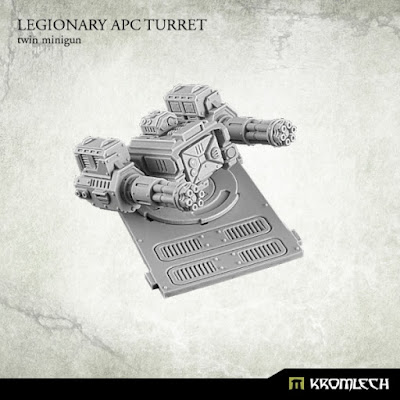 Here is a set of heads I may used for the Sgt Telion figure I ordered. 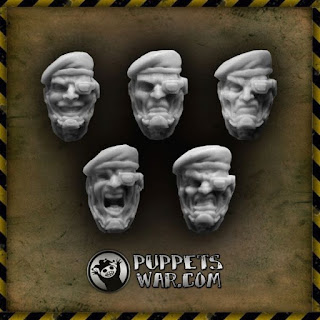 I have also started thinking about using a combination of Citadel parts, and parts from third parties to create my own battalion of what I have learned to be called "Reasonable Marines". Reasonable Marines are a sort of joke chapter, which you can read about, which I feel is a project which will allow me to really test my creativity in customizing my characters.

Stay tuned, as I will continue to post my progress here on this blog when ever it is that I finish my current work-in-progress figures. If you have any suggestions, make sure to leave them in the comments. Also dont forget to check out our social media pages listed below

Posted by SpikedGaming at 6:34 PM