Standing Out - Converting and Kit Bashing to Create a Unique Army.

About two years ago while working at Tesla, my Supervisor turned to me and said "Dude, we should play Dungeons and Dragons". I was excited with the idea of bringing a tabletop game to work, but I decided to reply "NO, let's play Warhammer 40,000!" Since then I have been deeply obsessed with Warhammer, and miniatures in general, specially because of the creative freedom granted by the grey plastic which invites players to create their own legions and lore. The thing is that no matter what army you play as, you have the same selection of troops at your finger tips as everyone else. a unique paint scheme is not always enough to make your army feel like "your guys", and that is when kit bashing and conversion is required. Kit bashing is the art of taking bits from various kits and combining them in such a way that you make something new, something to fit your image, something which makes this miniature yours.

Conversion is similar, but usually involves the use of tools to modify bits, and figures as well as the use of sculpting putty (green stuff). Conversion also usually completely changes the role, character, or overall function and appearance of the miniature being converted. For instance, I usually swap out Space Marine Scout heads for some Anvil Industries head sets, I also usually add pauldrons to my scouts - this is kit bashing. On the flip, there are people out there who have taken Primaris Space Marines and added their own features to create a gritty, grim dark version of Buzz Lightyear. While some may say that both kit bashing and conversion are the same thing, I believe the difference is in the end result of the model, and the extent of work it took to get there.

Some people alter their figures for the sole purpose of having miniatures which are unique to their army. Other people convert to bring characters into their game for which no actual model exists. Others do it for both reasons. Whatever your reason may be for wanting to alter your miniatures, the next step is sourcing bits and kits for the conversions. Here are a few of the sources I use for my own miniatures.

Anvil Industry is a manufacturer from the UK which makes their own range of miniatures as well as their tabletop game. Their Exo-lords line of miniatures is plentiful in Space Marine compatible bits from pauldrons, weapons, and accessories. Their Regiments line has an abundant selection of Imperial Guard compatible bits with such a wide product range that Imperial Guard players are sure to find something to fit their specific army. My favorite thing about Anvil industry is their wide selection of heads, in fact this is where I get ALL of my head replacements from. I specifically use Anvil Industry to source replacement heads for my Space Marine scouts, as the stock heads make them look a little too silly for the grim dark universe of the Warhammer 40,000 universe. 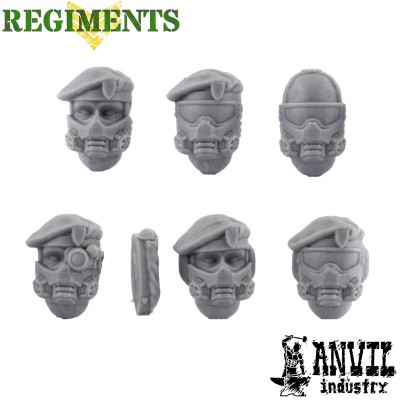 The quality of Anvil Industries kits is top-notch, very close in quality with Games-Workshop miniatures, making their bits incredibly useful for kit bashing and conversion. The only downside is that the scale is slightly off, not enough to make it immediately noticeable on first sight, but experienced hobbyist will notice. Experienced hobbyist should have no problem getting around this minor imperfection through the use of green stuff, or through the strategic posing, and placement of the miniature in question. If you are a Space Marine or Imperial Guard player this supplier is a must.

Kromlech's bits are top-notch in quality, easily rivaling Anvil Industry and Games-Workshop, but they too suffer from a scaling issue. Where Anvil Industry bits are slightly too small, Kromlech's bits are slightly larger. Again experienced hobbyist should have no problem working through this minor issues, and even with little modification the size difference is not noticeable at first glance. I will say though that I am not sure this is a problem across all product ranges, but it was one of the first things I noticed with their range of Ork bits.

Like Anvil Industry, Kromlech has a wide range of products, but their range covers more than human factions. Kromlech offers bits compatible with Space Marines, Imperial Guard, Chaos Space Marines, Orks, and other miniatures. Despite their large selection, when visiting their site, and when looking at their front page, it is clear that their specialization is Ork related kits. Their Ork line offers a wide range of variation from World War II Germany inspired Orks, to Pirate Orks. They also offer a wide range of vehicle conversions, something which Anvil Industry does not readily have.

A great source for Warhammer 40,000 compatible proxies, as well as bits. However one look at their product line and it is easy to see that their lines are 100% created for the sole purpose being used for Warhammer 40,000. The logos, design, art style, and even names are so close to the 40k factions and heroes they represent that this company is basically walking the line of copyright infringement. Despite the blatant rip-ff of some of the model designs, this source is perfect for bits for almost every army. Specifically I like to use this supplier for anything related to Chaos Space Marines, specifically their vehicle conversion kits.

If you are building a Space Marine army, or Tau army, but want to make sure that all the bits being used are 100% Games-Workshop bits, then this is your go to place. This source does not manufacture their own bits, but rather creates a market where players can buy loose bits, by model, make, and army. You are almost 100% guaranteed that the products you buy here are 100% authentic, and original. Pieces come unpainted and unassembled. The range of bits available here is incredibly wide, offering more than just bits from standalone unit sets, but also those found in core sets such as "Assault on Black Reach" and "Space Hulk". Aside from Anvil Industry, this is my second most used supplier.

I have a love/hate relationship with this supplier. On one hand their designs are exceptional and beautifully sculpted. On the other hand, their scaling is way off, and their quality is overall inconsistent. One example is the fact that their helmeted heads are the exact same size as their unhelmeted heads. Normally when someone puts on a helmet their head will look bigger, due to the addition of a whole layer of protection, but with Puppet's War product this is not the case. The pauldrons they make are too thin giving them an overall flimsy feel, given their price point is no different from products offered by Anvil Industry, Kromlech, and Games-Workshop you end up feeling like you are paying the same amount, for less quality. 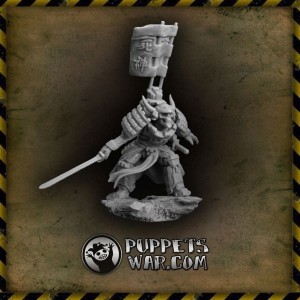 A pro for this supplier is that they have a wide range of products to choose from. Their environments, vehicles, and vehicle weapons kits, for example, are top-notch, in that they are very detailed, and scaling does not appear to be too off the center. My only advice when using this supplier is that you tread with caution, and don't rely on them for EVERY part of your conversion.

Buying brand name bits, kits, and sets can get pricey. The internet has made it incredibly easy to access bits from various sources across the globe, and it is during these searches that we often encounter the temptation of buying counterfeit kits. After all why pay the $60.00 for Reboute Guilliman when you can head over to a Chinese recaster and buy him for $25? The issue with doing this is that such actions hurt the community as a whole. The amount of time and resources that goes into the creation these products is astounding. As with music, and cinema, piracy does nothing but hurt the industry by diverting revenue to the counterfeiters and away from the creators. It's also important to note that you get what you pay for, the reason that most miniatures do tend to be a bit pricey is because of all of the work that goes into creating these products including quality control. Steer clear of Heresy, and remain in the Emperor's favor by supporting official products, made and distributed by their creators. One thing to remember before committing to a conversion or other form of alteration is that some stores, such as Games-Workshop, may not allow you to play with altered versions of their products. Most local hobby shops may not be a problem, but brand specific stores such as Games-Workshop may be more strict about your alterations. The same goes for some Tournaments, even if not hosted by the brand's manufacturer/publisher. With that in mind, pick a fandom, pick a faction, and let your imagination run wild.
Posted by SpikedGaming at 12:18 AM