Who Remembers the World of Warcraft Trading Card Game?

Let me set the stage for ya'll.

It's 2007 and I just graduated high school in San Jose, California. I have been collecting Yu-Gi-Oh cards since the 7th grade, and Pokemon cards since the 4th. I am now entering college, and most of my fellow duelists have moved on to other cities to start their college education. With no one to duel, or battle on the table top, my decks soon begin to gather dust in some random corner of my bedroom. It appears that my trading card game days have come to an end. At the same time, my more tech savvy friends have been helping me build my very first gaming PC, it appears that my TCG days are over,  this is the end of an era.

My goal at college was to graduate as soon as possible, this meant that I packed my day with as many classes as I could. As I had no car to drive to school, I often stayed on campus until about 10:00pm at which point my Dad would pick me up on his way to home from work. I was stuck on campus from 7:30am to 10:00pm most days of the week. This means that despite having a fancy new gaming PC, I didn't actually get to use it too often, except for on the weekend. Still though, I am a gamer, and I need to get my gaming fix..well, this is where the WoW TCG came into the picture. 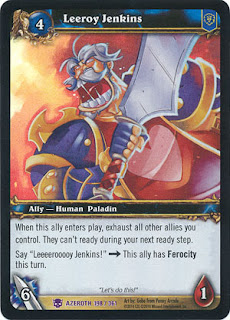 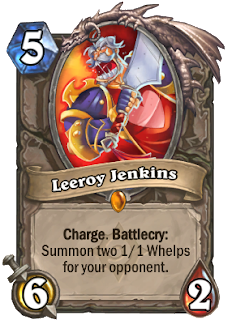 Most of my friends were avid WoW players from day one, I had some experience in the Warcraft IP myself, however my experience was mostly from the Warcraft novels, and the original real time strategy games. Since we were all usually stuck on campus at the same time, and usually on the same days, we started to look into various ways to spend the time. It was around this time in late 2007 that we  stumbled upon the World of Warcraft trading card game. As we were all in some way familiar with the IP we decided to buy our own decks, and start playing the game. Honestly, it consumed us. Soon we were buying hundred of dollars of booster packs, multiple deck boxes, some of my friends were even attending local tournaments.We would pass the time by challenging each other to battles, some of them one on one, other Horde versus Alliance. Our weekends would often include group trips to the local gaming shops to purchase more cards to expand our decks.

Although we started playing in 2007, the game was actually released in late 2006 by Upper Deck Entertainment. The first set to be released was the "Heroes of Azeroth" set, soon after was the "Fires of Outland" set which actually has one of the more valuable loot cards. Eventually Upper Deck would lose the license for the Warcraft IP, and the game would be picked up by Cryptozoic, until the game was eventually discontinued due to Blizzard releasing "Hearthstone". Hearthstone is considered a spiritual successor of the original TCG, using a lot of the original TCG artwork, as well as similar game mechanics.


Despite the similarity between the TCG and Hearthstone, nothing can compare to opening up a brand new booster pack. That new card smell will forever stay with me as I remember the good times I spent playing with my friends. Honestly, I wish it would make a comeback, and considering the facebook groups dedicated to keeping the game alive, I don't think I'm the only one that wants this game to make a comeback.
Posted by SpikedGaming at 6:45 AM